The Fed lion has found the courage to increase interest rates drastically, the inflation tiger is still ambushing the economy, and now the stock market is dancing with bears. The question for investors is: Are we still deep in the forest? Or is that the Emerald City on the horizon? To extend the metaphor – that wizard wasn’t much help, and the solution to the problem turned out to be a liquidation.

Just to be clear, they melted the witch. We’re not suggesting melting your portfolio as long as you have a battle tested plan in place.

What Does All of That Data Add Up To?

The Fed is trying to contain inflation by slowing economic growth. The key inputs are consumer demand for goods, which of course, is driven by strength in consumer balance sheets. And that is driven by full employment and rising wages. The Fed is increasing interest rates, which makes money more expensive.

The Fed is aggressively raising rates at a stated – and unusual — pace of 50 basis points at each of the next several meetings. This is after the 75 basis point hike yesterday.  Even before rates go up, the market begins to price in where rates will be months down the road. That’s part of what is contributing to the pullback in equities we’ve seen this year. The market is also reacting to uncertainty. There’s no way to know if the Fed will be successful in orchestrating a soft landing as opposed to a hard landing which would result in a recession.  Let's hope and pray that our plane doesn't bounce too hard when it hits the runway.  Keep your seat belts fastened and your tray tables in an upright position as we prepare for landing.

Lowering Inflation Requires Slowing Economic Growth – But How Slow Is Too Slow?

The Fed’s stated belief is that the long-term potential growth rate of the U.S. is around 1.8%. Growth at this level would be likely to keep inflation at the Fed’s preferred level of approximately 2%.

How Did the Markets React in May?

After tickling the bear mid-month, the S&P 500 managed to close in positive territory by a hair of 0.01%. After seven consecutive weeks of declines, the index saw the best weekly performance since November 2020.

All eyes are on that inflation number that came in too hot on June 10th.  Going forward, markets will be looking for more evidence that the Fed’s aggressive rate moves are working. Gas prices have bounced back up to levels not seen since the first weeks of the Ukraine invasion. Headline CPI includes energy – so the pressure is on.

It’s probably hard to understate the impact of the inflation number as a market mover. The belief that the Fed would need to be even more aggressive in raising rates – with a potential 75 basis point increase – was in part responsible for the sustained negativity about equity markets. With even a small decrease in inflation, market sentiment moved back to positive as investors displayed more confidence that rate increases would be at the levels the Fed has outlined.  That was all before the June 10th release.

Chart of the Month: Manufacturing is Still Expanding 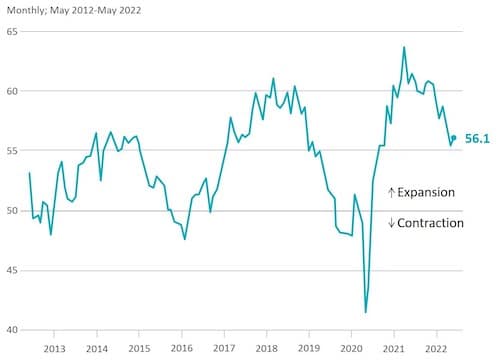 Source: All performance as of May 31st, 2022; quoted from S&P Dow Jones Indices.

The 10-year U.S. Treasury ended the month at 2.85%. Intra month, the key rate reached 3.21%. This marks the first time this rate has been above 3% since December 2018. The Bloomberg U.S. Aggregate Index was up, returning 0.64%. As represented by the Bloomberg Municipal Bond Index, Municipal bonds returned 1.48%. High yield corporate bonds were positive, with the Bloomberg U.S. High Yield Index returning 0.24%.

First, let’s look at some stats for bear markets:

The bear was definitely at the door in May. And in mid-June he is back, even if not to stay. The traditional course of action for a bear market is to shift to a defensive strategy and try to cushion your portfolio with more conservative investments that throw off cash. For example, bonds and dividend stocks. However, before you revamp your portfolio – consider your own goals and your plan.

Recession-proofing your entire financial plan means revisiting expenses, reviewing cash planning, understanding your interest charges, and thinking about the long-term. Timing markets isn’t a long-term strategy. It’s too easy to miss when the turn happens, and markets begin to rebound, and being out of the market can be very costly.

One more stat: Ned Davis Research finds that, on average, stocks lose around 36 percent during a bear market. Hartford Funds has the bull market stat: a 114 percent gain on average. 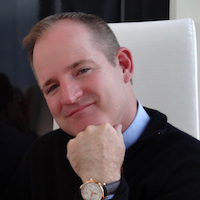 Michael Miller, CFP®
Back to Blog

Between industry news and personal experience.